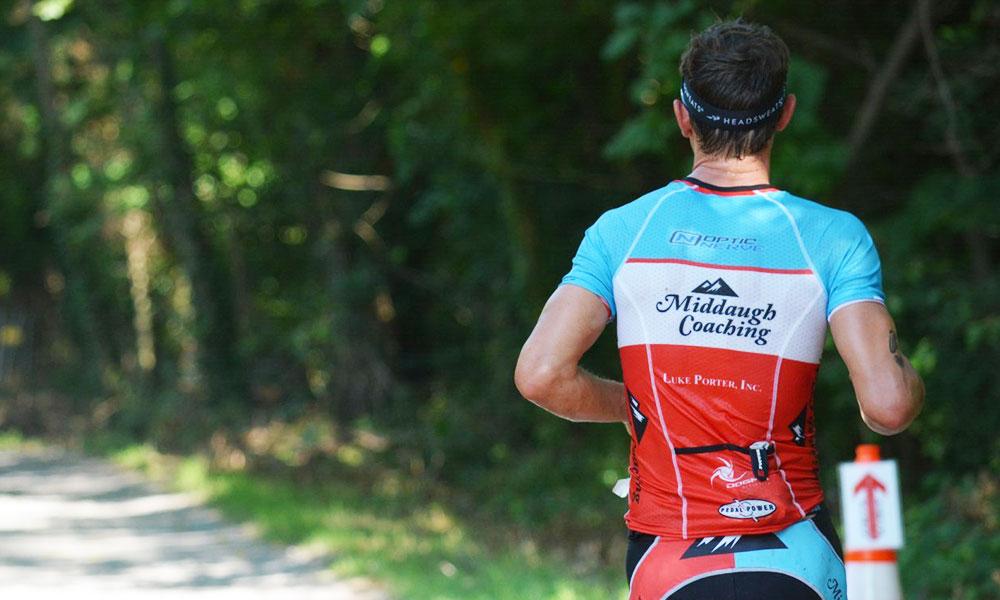 The Science Behind the Bike to Run Transition

As every triathlete knows, the bike to run transition can be a son of a motherless goat. A seasoned runner can be humbled to a shuffle as muscles recalibrate to different movement patterns. In this article, we are going to explore some reasons for this and some practical applications for your training to help improve T2.

Triathlon running is known to be much harder than stand-alone running at the same speed. Oxygen consumption (V̇O2), respiratory frequency, ventilation rate, and heart rate are all increased especially during the first 5-7 minutes of the run. This is likely due to the extreme effort required on the bike causing glycogen store depletion, ventilatory respiratory muscle fatigue, dehydration, decreased stroke volume and heightened core body temperature. It is estimated that the energy cost during the triathlon run is 1.6-11.5 % higher than running alone (Millet and Vleck 2000). The big percentage difference depends on how hard you go during the bike leg and how conditioned you are. The course layout of XTERRA races make pacing much more difficult. It seems to be significantly smaller for elite athletes. This is likely due to superior fitness and efficiency and the difference in race duration.

A big chunk of the increased energy cost when running off the bike is likely due to changes in an athlete’s biomechanics as they find their run rhythm. One study showed an 8% decrease in run efficiency when running off the bike in an Olympic distance triathlon (Millet and Vleck, 2000). After cycling, the mean stride length and gait frequency decreases, triathletes adopt a more forward leaning posture, and there are variabilities in knee angle in the non-support phase, and knee extension during the stance phase (Hausswirth, Bigard, Guezennec, 1997). In layman’s terms, when some people run off the bike, they look like a dog with worms, scooting their bum across the grass.  Hip flexors are tight, the forward lean is coming from the waist, and they are “sitting” too much, essentially running with their cycling muscles.  Conversely, elite runners run with their center of gravity much higher, hips further forward, and gain running economy from something called “musculotendinous stiffness.”  They gain efficiency by using the natural energy return from the stored elastic energy in the muscle-tendon complex, instead of contracting excess muscle fibers.

Some of the biomechanical deficiencies found in the early part of the triathlon run may be from neurosensory feedback lags from ripping the bike leg. A study found that postural compensation at the start of the cycle to run transition may be out of phase with actual neurosensory feedback. Muscle fatigue and/or glycogen depletion from the preceding bike would increase impairment of the effectiveness of the postural regulation loop, as would any redistribution of blood flow with the change in activity (Millet and Vleck 2000).

How often should you do a bike to run brick?

A brick session refers to the bike/run workouts, typically performed with a medium distance bike, immediately followed by a short run.  If the goal is to neuromuscularly improve your efficiency and sensations at the beginning of the run, then the transition can be as short as 10-20 minutes.  The ultimate goal is to decrease the time lag that your neuromuscular system takes to transition to your most efficient running mechanics.  Studies have found that when following consistent bike to run brick training triathletes acquire a new, transition-specific flexibility in knee angle behavior. Reduced rigidity following the cycling section of the race will allow for a quicker, smoother, and more efficient transition into steady state running mechanics (Haworth, Walsh, Adam, Strang, Hohl, Wilson and Brown 2010). Consistently performing brick sessions is the key (once per week), and further gains can be realized by including more brick sessions, but with diminishing returns.  As key races approach, you may want to consider performing 2 or even 3 brick sessions per week.  Also the occasional bike/run/bike/run session can also be effective and keep things interesting.

What does this mean tactically on race day?

This is a tricky question and the answer is going to be different for each individual. The easier you go on the bike the easier and more efficient your transition to the run will be. Evidence shows that riding at a steady pace or drafting rather than lots of undulation in effort is typically best for a good run transition, but in XTERRA this is not an easy task.  We do not recommend giving up big chunks of time on the bike just to have a good run.  I would rather be in striking distance to whomever you are racing off the bike than to crush the run but never be in contention. There are no studies on the effect of riding the last 3-10 minutes of the bike leg hard to gap your competition, but personal experience has shown that it makes your transition to the run more difficult. However, maybe being out of sight of your competition is an advantage for you and worth the risk. It really comes down to your fitness level, trust in your training and knowing your competition and making calculations based on that. If you have done enough bike to run transitions in your training, you know that you don’t have to feel good off the bike to have a solid run.

References
Hausswirth, C; Bigard, A.; Guezennec, C. (1997). Relationships between Running Mechanics and Energy Cost of Running at the End of a Triathlon and a Marathon. International Journal of Sports Medicine 1997; 18(05): 330 – 339.

Middaugh Coaching offers personalized coaching for athletes of all levels. There are still a few slots open for the 2019 season!