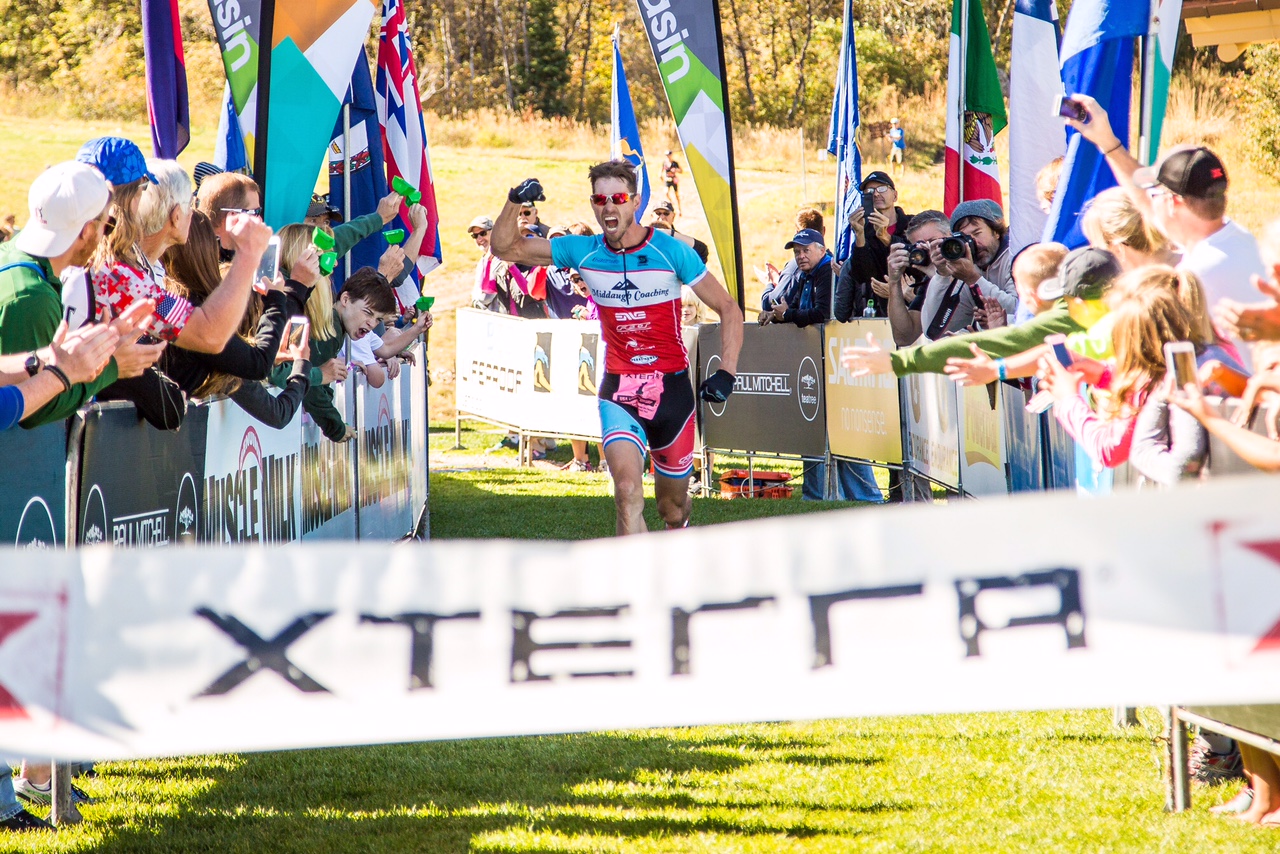 For me, triathlon training started as a way to cross train for distance running.  I realized early on that I was not as durable as some of the other collegiate runners and strength training, swimming, and biking brought some balance and allowed me to continue training through injuries and multiple knee surgeries.  Swimming and biking are great low impact activities, but all triathlon disciplines are incredibly repetitive and can lead to some specific imbalances.  Strength training, when performed properly can improve mechanics, resist injury, and improve performance.  Personally I shoot for 12-16 weeks of consistent strength training starting in the off season then shift to strength maintenance during the competitive season.  Sometimes I will revisit a strengthening focus during a mid-season break.

Ultimately the goal of strength training should be two-fold: injury prevention, and a positive transfer of strength, power, muscular endurance, and movement efficiency to the sports themselves.  Since movement patterns of swimming, biking, and running are extremely repetitive it is important to address movement impairments with targeted strengthening of under-active muscle groups to prevent injury. For performance, the exercises need to be very specific in terms of movement patterns and velocity.  Properly periodized programs move from general to specific and in the case of endurance sports they need to start as specific and move to more specific to avoid conflicting peripheral adaptations.  For swimming, cycling, and running, this means eventually performing a portion of the resistance training within the targeted sports.

Although strength training has been demonstrated effective in all phases of an annual plan, it makes the most sense to start strength training during the off-season to avoid overtraining.  If you can put in a solid 12-16 weeks of structured strength training now, there is a “Long Lasting Training Effect” and a “Long-Term Delayed Training Effect” of special strength preparation that can yield great results during the competitive season.  What this means is that you might not see the benefit initially, and in some cases performance can decline a little, but long term it can be very beneficial.  Here are some real guidelines to help you develop an off season strength routine.

Core strength used to be the buzz word in the weight room until people took it to extremes.  Yes a certain amount of core strength will improve your efficiency if you are weak, but don’t just isolate your abs.  I like to think of the core as the lumbo-pelvic-hip complex.  So muscles that stabilize your pelvis, lumbar spine, and hips are all important.  I start most of my sessions with glute activation that can be done on the floor or standing with a band.  Think of hip extension and hip abduction.  About 20 percent of your energy spent running is used in the frontal plane (side-to-side).  Your gluteus medius is one of the most important stabilizers in the frontal plane when you are in a single leg stance as you are with running. Gluteal muscles can be primed first in isolation like with a glute bridge and then used more functionally such as in a single leg squat or tip over.  Most low back pain and a host of lower extremity impairments can be linked to under-active glutes.

The core muscles are mostly designed to stabilize and limit movement so it is more functional to work your abs with a plank than with an ab crunch. Your obliques can be targeted with a weighted ball toss instead of a side bend.  Learn to activate your transversus abdominus, the deep core muscle that wraps around below your belly button like a cumber bun.  An easy way to “feel this muscle is to place two fingers below and to the side of your belly button and simply perform a deep cough or laugh.  The muscles of your lower back get plenty of work with functional movements such as squats and deadlifts and don’t need to be isolated.

For posture, we are primarily addressing the rounded shoulder, forward head posture.  This is a big contributor to shoulder impingement in elite swimmers and unfortunately biking and running can make it even worse.  Desk jockeys also suffer from this “upper-crossed” syndrome (think of how you are sitting right now).  Luckily a few simple exercises can address this problem (coming in Part 2).

A balanced strength routine becomes so much easier to put together when you think in terms of movements and planes of motion, rather than muscle groups.  Avoid single joint isolation unless you are preventing injury by activating an under-active muscle group.  Focus your lower body strengthening on ground based, multi-joint exercises.  When you perform a squat or a lunge you are recruiting muscles in the proper ratios, compared to a knee extension or a hamstring curl. Incorporate exercises in a single leg stance such as a single leg squat, single leg RDL, or step up to balance.  Hire a personal trainer for a few sessions to make sure you are doing some basic movements correctly.

For your performance improving exercises, think of the planes of motion and the speed of movement.  First make sure that you are hitting the prime movers using proper form.  Then begin to think more about the specific needs of each discipline.  For example, cycling uses all concentric muscle contractions, whereas running has a big eccentric component and uses stored elastic energy in the tendons and muscles.  So for cycling specific exercises you spend a little more time under tension and for running specific exercises you progress to faster, more dynamic movements.  Also, during running you are either in the air or in a single leg stance with about 20% of your energy spent in the frontal plane (side-to-side).

Muscles are designed to work synergistically across joints.  The posterior chain is the chain of muscles, tendons, and ligaments across the back side of your body, primarily the hamstrings, the gluteal muscles, and the muscles of your lower back.  Of these, the prime movers are the gluteal muscles and when other muscles take over it is called synergistic dominance.  Squats, deadlifts, and Olympic lifts work the posterior chain.  If you don’t feel comfortable doing Olympic lifts, then one of my favorite moves is the kettlebell swing.

Keep in mind that strength training is supplemental to endurance training.  Keep strength training high intensity, but avoid the boot-camp style circuit training with short rest and high reps.  Your goal is to build strength and power without accumulating unnecessary fatigue.  Take more rest and work more intensely for short amounts of time.  Your body uses 3 basic energy systems:  A-lactic (ATP-PC), anaerobic, and aerobic.  If you keep most of your exercises A-lactic (10-15 seconds with adequate rest) then it won’t interfere as much with the rest of your training.

Work is defined as force X distance.  Power is defined as force X distance/time.  When you add speed to a movement, power goes up.  Heavy strength training shows good results in the studies because there is high muscle fiber recruitment and high power.  However a similar power can be achieved by moving lighter weights more quickly.  Interestingly, there are good studies that show heavy weight training to be effective and studies that show light to moderate weights to be effective.  With lighter weights it is possible to move at a faster speed that might replicate the sport, think of plyometrics.  However with heavy weights the speed of movement is slow, but still increases power.  They discovered that the intent to move quickly is as important as actually moving quickly.   Regardless of how much weight you are lifting, it is important to have the intent to move that weight quickly to increase the power output.

Plyometrics are basically jumping exercises with short ground contact time with the goal of increasing power.  Jumping is not for everyone and a little bit goes a long way.  Start with lower intensity exercises such as ankle hops or running form drills and progress to higher intensity like squat jumps, box jumps, and bounding.  Plyometrics can be stressful so pay attention to how many jumps you do in a session start with around 100 total jumps and keep it under 200.  If you don’t think you can do plyometrics, try the jump rope.

There are many studies that show plyometric training improves running economy.  This means that for a given running speed, oxygen cost is actually lower.  About 10 years ago my brother and I tested this on ourselves in a case study and measured oxygen consumption at 4 different running speeds before and after an 8-week plyometric training program.  Lower heart rates at any given speed indicates improved fitness, but we also saw lower oxygen consumption which indicates improved running economy.

Transfer of training is the ultimate goal of concurrent training.  If you increase your one repetition max on the squat by 30%, you will not see the same 30% improvement in watts on the bike.  One solution is to mimic some of the motions of your sport and the velocity, but at some point you should actually perform strength training within the actual sports.

Swimmers can swim with drag or do tethered swimming.  Be careful with paddles since you can risk shoulder injury.  Runners can perform strides or short hill reps.  Cyclists can perform short, a-lactic stomps, which are 10-15 second max sprints with full recovery.

Remember, strength training is supplemental, don’t get sidetracked with your desire for bigger biceps.  A little bit can go a long way and more is not always better.  A little bit of muscle soreness following a session is a good sign you are on the right track, but debilitating soreness that lasts a week or more means you over did it.  Endurance athletes are typically well trained aerobically, but may be undertrained muscularly so start conservatively.  Plan a series of 8-10 exercises that fit with these guidelines and perform 3 sets of each.