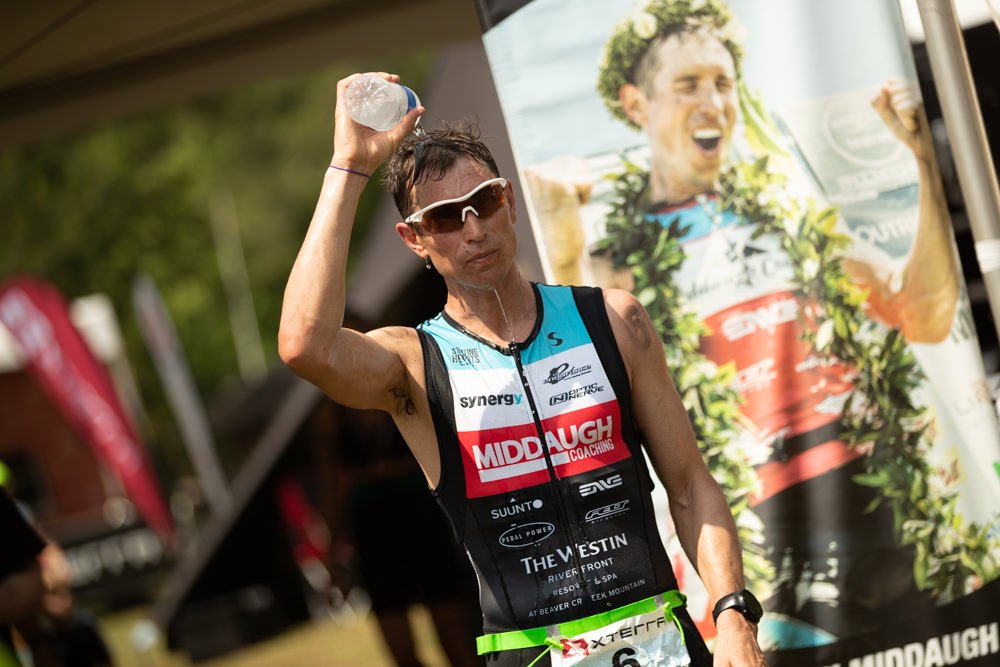 Fueling For Your Big Race

Ask 10 different endurance athletes about their diets and you are likely to get 10 different answers. On race day, however, this changes.  Your nutrition plan needs to be precise because high-intensity exercise requires carbohydrate as your primary fuel source. The muscles, liver, and bloodstream store carbohydrate, but for most athletes, the supply only lasts between 1-1/2 to 2-1/2 hours depending on how saturated your glycogen stores are to begin with and the rate at which you are burning carbohydrate.  One solution is to slow down in order to increase fat metabolism and spare carbohydrate, but for most of us competitive types, that is not an option.

Let’s cut to the chase. To avoid slowing down, it’s important to have your race-day nutrition dialed in. Your fueling and hydrating goal for intermediate distance racing is not to replace everything your body consumes, but to delay glycogen depletion and dehydration/electrolyte imbalance at least until the finish line.

A well thought out strategy doesn’t need to be complex, but needs to be effective and familiar.  First, start with how long the race should take you.  Shoot for about 240-320 calories per hour at least during the bike portion.  If you prefer to think in grams, then about 60-80 grams of carbohydrate per hour.  This can be a combination of a drink mix, energy gel, and/or solid food.  What’s key is to get the balance right. You need to take in sufficient calories to fuel your effort, but if the concentration of carbohydrate is too high then it will delay gastric emptying (sit in your stomach) until it is diluted by either water you ingest or water pulled from your body, further dehydrating you.

Eat for the Course

For XTERRA racing I like to keep it simple.  If the race will take around two hours, then I can rely exclusively on liquid calories from my drink mix.  I don’t need to maximize calorie intake, but I will race better if I stay hydrated and take in some calories. If the course is more dynamic with less sustained climbing, then intensity is not as sustained which can allow you to dip back into your fat burning zones and spared some carbohydrate.

For the championship races, especially those with massive amounts of elevation gain, the energy output is the highest and most sustained, with some races lasting three hours or longer.  For those races, shooting to maximize the amounts of water, calories and electrolytes is critical, but also needs to be practiced. I like to start with my familiar drink mix and then have a 400 calorie liquid gel flask taped on my top tube that I will take during the second half of the bike along with water from aid station(s).

For races like XTERRA Quebec, the XTERRA Pan American Championship, and the XTERRA World Championship, races can last for three hours or longer and it’s important to maintain your consumption of 240-320 calories per hour.

Use the Aid Stations

Another thing to consider is not transporting excessive amounts of water long distances (in racing and in life).  Use the aid stations – that’s what they are for.  At XTERRA Nationals and Worlds you’ll find bottles with water and Gatorade.  Think of a race as a catered workout and only carry an extra water bottle when you have determined there is too much time between aid stations to rely on only one bottle. I personally don’t use solid food during my races, but many prefer some solids or semi-solids, especially if the intensity will be slightly lower or if you know you will be out there longer.

Write down your nutrition plan before big races so that you know exactly what to do. Seeing it on paper will help you remember it on race day. It also allows you to revisit your plan later. I know many athletes that go back to their nutrition plan after their race and make notes on how they performed and how they felt that day. This analysis can help you nail down your nutrition and will make putting together your next plan much easier.