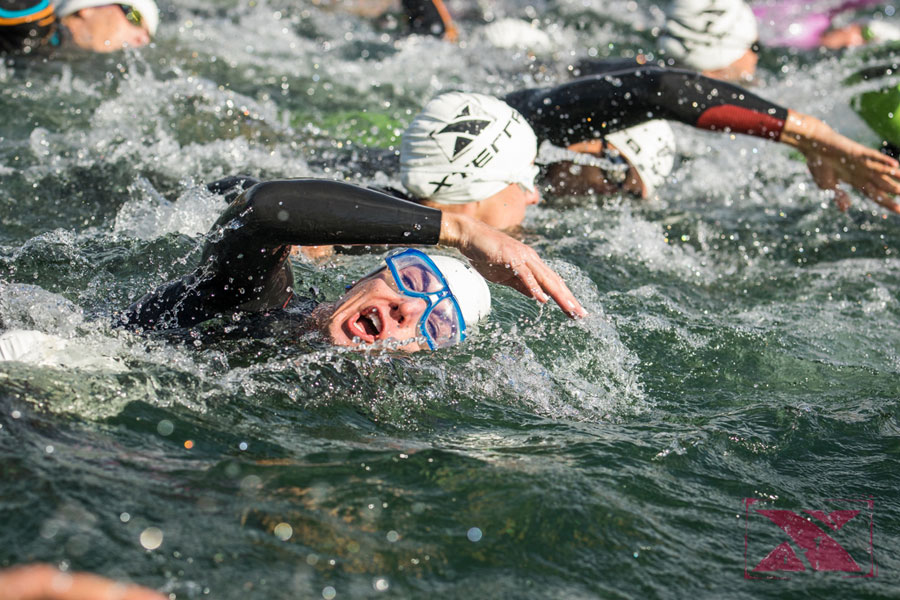 Breathing Patterns During the Swim

Breathing is problematic in swimming freestyle.  The primary issue is that breathing is dependent on your stroke rate and the type of breathing pattern you adopt.  The most streamlined position has your head in alignment with the rest of your spine, the water line hitting the top of your head with it mostly submerged, and your gaze aimed straight down or just slightly forward.  The problem is that you can’t breathe in this position unless you are swimming with a snorkel.  Unlike running or biking, breathing while swimming needs to be timed with your strokes.

There are only a few options for breathing.  One option is to inhale once every two strokes so that you are breathing on the same side every time (one breath per stroke cycle).  Another option is to inhale once every three strokes so that you are bilateral breathing or alternating your inhale from one side to the other.  Other options have you breathing even less frequently, such as a 2-4-2 breathing pattern, or breathing every 3,4,5 or more strokes.  When we watch the great Olympians swim short distances, we often see them breathing very little in an attempt to minimize drag and swim as fast as possible with the tradeoff being hypoxia and extreme oxygen debt.  They train to swim this way but cannot sustain it for long distances at intense paces.  When you watch distance swimmers during the middle portions of their races (not usually seen because that’s when NBC goes to a commercial break) you see much more frequent breathing patterns.

A case for breathing every two strokes

Although it is not well documented, your breathing rate varies with your relative intensity of steady state exercise.  Seasoned runners know this and may be able to tell you that at low intensities they tend to breathe in for about 2-3 steps and out for about 2-3 steps.  At an endurance pace they may switch to 2-2 pattern, and around threshold it will be 2-1 or even 1-1.  This happens pretty naturally and they don’t need to think about it.  At an easy endurance pace, most athletes will breathe 20-30 times per minute.  Near threshold intensity it is common to be 35-45 breaths per minute.  Untrained people will peak out at about 45 breaths per minute, but elite athletes can hit around 60 breaths per minute for a maximal effort.

Case study 1 is an adult-onset swimmer with a stroke rate in open water of 60 strokes per minute.  If this athlete sticks to bilateral breathing, then he/she will be limited to 20 breaths per minute.  With that breathing pattern and stroke rate, this swimmer will be relegated to an easy intensity for the entire triathlon swim.  By breathing once every two strokes, then he/she will be able to breathe 30 times per minute, which could allow the swimmer to sustain a tempo-threshold intensity for the duration of the swim.

To truly race a 1500-meter swim at a threshold intensity at 30-40 breaths per minute you either need to have an incredibly high yet efficient stroke rate while bilateral breathing, OR you need to breathe every 2 strokes (breathing on the same side every time).  The three exceptions are the swimmers with the super high stroke rates, the incredibly smooth swimmers that don’t need to swim hard and can swim at an endurance intensity and still hang in the front group, or the triathlete not planning to race the swim portion of a triathlon.  Another option for those few exceptions is a 2-4 breathing pattern.

Bilateral breathing still has its place in training.  It can help balance out your stroke by promoting symmetry.  It can also be used for breath control and to ensure you are swimming at easy-moderate intensities when designated.  I like to bilateral breaths during easy swimming such as warm ups, during short sets where it is ok to go into oxygen debt, or during long pulls where you don’t have the high oxygen demand.  Noteworthy, breathing every 2 strokes does not mean that you have to breathe to just one side 100% of the time.  Ideally you are breathing to one side for a period of time and then switching to the other side.  It is still a good idea to have the ability to breathe to both sides especially for open water swimming.